Christmas in the Park

Time: The event begins at 6:15 p.m. when the signal is given to turn on the window lights. The concert concludes around 8:00 p.m., and the windows remain lighted until 8:30 p.m.

Where: The event is held in the northern section of Central Park—about a block from the Museum—near the intersection of Garfield and Park avenues.

Parking: Parking is available on the street, in the Museum’s parking lot, and in various City of Winter Park lots. A printable map is available for download from the City website.

Seating: Bring your own seating if you need it. Blankets and lawn chairs may be set up beginning at 4:00 p.m. after the windows are installed. Tables are not allowed.

Public Transportation: The event is a short walk from the SunRail station. Check out the schedule at the SunRail website.

The seven leaded-glass windows on view are memorials, with religious themes, produced by Tiffany Studios for the chapel at the Association for the Relief of Respectable Aged Indigent Females in New York City (1814–1974).

The Association was founded in 1814 by a group of wealthy New Yorkers as a genteel private charity for elderly, indigent women, including widows of soldiers who fought in the War of 1812 and the Revolution. The first residence, constructed in 1838, was an alternative to the common almshouse. An expanded building was designed later by Richard Morris Hunt (1827–95), architect to the rich and famous of the late 19th century. The historic building at 891 Amsterdam Avenue is now home to Hosteling International New York City.

When the residence was threatened with demolition in 1974, Hugh and Jeannette McKean bought its Tiffany chapel windows at the request of the Association board. The windows are memorials to prominent women who served on the volunteer Board of Managers during the planning and construction of the Hunt building from 1881 to 1883. 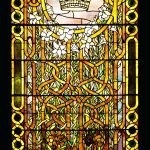 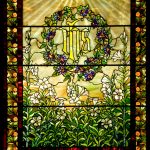 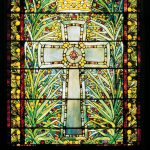 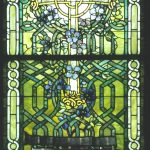 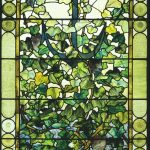 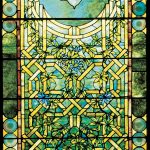 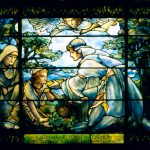